In the April Issue

•  The Anti-Viral Power of Aptamers 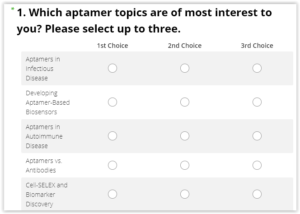 We’re planning several new feature articles on aptamers for 2019. Tell us which topics are of most interest to you.

There are many things to consider when designing an aptamer discovery project. Decisions regarding selection of DNA or RNA, use of a natural or modified library, inclusion of targets for negative selection, and further aptamer maturation are often dependent on downstream applications. The Base Pair articles below explore some of the many options in aptamer selection design.

The Anti-Viral Power of Aptamers

From August 2018 to March 23, 2019, there were 993 cases of Ebola infection and 621 deaths in the North Kivu and Ituri provinces of the Democratic Republic of the Congo. Lacking sensitive diagnostic tests and effective treatments, vaccination is currently the only option (10). The situation is similar for many of today’s deadly viruses. Without sensitive diagnostic tests and effective anti-viral therapeutics, first responders are struggling to distribute life-saving vaccines and limit the spread of deadly viral diseases. As the race to find cures for viral diseases continues, researchers are successfully pursuing selective aptamers (Learn more about aptamers) to develop enhanced viral identification assays and therapeutics to treat viral infection.

Filoviral VP35 (viral protein 35) proteins are immune antagonists produced by filoviruses, including Cueva virus, Marburg virus, and six species of Ebola virus. VP35 proteins disrupt the interferon signaling pathway to inhibit host response and act as co-factors for viral polymerase in viral replication. Selective RNA aptamers were shown to block VP35 IID-mediated immune suppression and expression of the Ebola virus. An aptamer selective for Ebola VP35 DII protein and an aptamer binding to Ebola and Marburg VP35 DII proteins with comparable affinity were identified, demonstrating the ability to develop both specific and pan-antifiloviral aptamers (2). Base Pair has recently selected aptamers to the Zaire species of Ebola and demonstrated early feasibility of a plate-based detection assay.

Dengue is a mosquito-borne flavivirus. Each year, 50 to 100 million people are infected with Dengue virus, resulting in more than 24,000 deaths. A research team in Korea discovered a truncated 2’fluoro RNA aptamer to Dengue virus that inhibits methyltransferase activity of Dengue virus serotypes 2 and 3, preventing viral replication. Selective binding, nuclease resistance, reproducible chemical synthesis and inherently low immunogenicity make this type of aptamer attractive as a viral therapeutic, but also useful as a diagnostic agent (5). In collaboration with UCF and the Gates Foundation, Base Pair has developed selective aptamers for the detection of mosquito-borne viruses including Dengue, Zika, and Chikungunya in mosquito saliva. Aptamers are promising tools for environmental detection, diagnosis, and treatment of tropical viral diseases.

The seasonal “flu” actually infects more than 3 million people and leads to more than 300,000 respiratory deaths each year. Hemagglutinin (HA) is a protein on the surface of influenza virus particles involved in binding to host cells. Successful binding and cleavage of hemagglutinin by host enzymes into HA1 and HA2 subunits is required for infection. Researchers in China selected a DNA aptamer against hemagglutinin from the Influenza A virus subtype H1N1. The team demonstrated aptamer interference with HA-glycan interactions and inhibition of proliferation of the Influenza A H1N1 virus. The aptamer was also used to generate a label-free sensor for the detection of H1N1 virus (6).

Approximately 1.1 million people in the United States are living with HIV (3). While current therapies significantly reduce viral loads, pockets of HIV-infected cells typically remain hidden. Prevention of renewed infection from these hidden cells, or HIV reservoirs, requires lifelong anti-viral treatment, making the elimination of HIV reservoirs a major concern for HIV researchers (1). While peptide- and antibody-based nanocarriers have been used to target areas of T-cell activation and HIV infection, there are certain areas within secondary lymphoid organs that antibodies can’t penetrate. As a potential alternative, researchers are turning to smaller, non-immunogenic aptamers. Researchers in Spain and South Africa selected DNA aptamers to the chemokine CCL21, which facilitates antigen-specific T-cell activation and chemotaxis. In vitro, aptamers tested at elevated concentrations showed no unwanted effect on the viability of HEK293 and HL-60 cells. In vivo, aptamers infiltrated the spleen and both the subcapular sinus region and the deeper paracortex region of the lymph node, demonstrating aptamers are a viable option for targeted delivery of HIV drugs and the depletion of HIV reservoirs (4).

Because aptamers are selected in vitro, they can be selected against non-immunogenic, toxic, or infectious targets, which is ideal when generating affinity reagents against viral proteins. Aptamers can be selected to differentiate between highly similar compounds, including different species or serotypes. They are inherently non-immunogenic and can be easily designed or modified for improved stability in vivo. Small aptamer size also promotes access to dense tissues and cells. Aptamers can be conjugated and complexed in a variety of different ways without loss of selectivity or affinity, ideal for detection and targeted delivery applications. Chemical synthesis offers excellent lot-to-lot reproducibility and unlimited access to selective aptamers.

Development of aptamer-based diagnostics and therapeutics begins with aptamer selection. With Base Pair’s patented multiplex SELEX, aptamers to multiple targets, species or serotypes can be discovered in a single SELEX protocol. Aptamers can be screened for selective- and pan-binding.

Contact Base Pair today for more information on selection of aptamers to viral proteins and other targets of interest.