Aptamer discovery is a complex process. Customized libraries and selection techniques are employed to achieve selective binding to a target of interest under anticipated conditions. In some cases, selected aptamers may not quite achieve the degree of affinity or stability required for a specific end-use application. In addition, aptamer modification for immobilization or signal generation is often required. Following initial selection, a wide range of tools and techniques are used to evaluate and improve performance for DNA and RNA aptamers. Aptamer modification is often an iterative process. Base Pair’s in-house selection, sequencing, bioinformatics, and affinity determination capabilities make successful aptamer maturation possible. Whether your aptamer of interest was discovered at Base Pair or in another laboratory, Base Pair can help select the best modifications based on your individual needs and end-use applications. 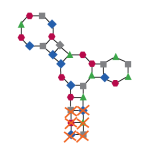 initial aptamer selection, a common step is aptamer truncation. Truncation involves reducing aptamers to the minimum sequence required to maintain selective binding. In some cases, truncation can increase aptamer affinity. It is thought that reduction of the sequence length may reduce steric hindrance, decrease the number of intermolecular interactions that must be disrupted for target binding, or improve stability of the tertiary aptamer structure (6,9). Truncation also reduces aptamer production costs (9). 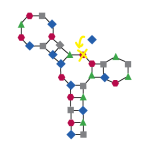 some have coined “in silico” maturation, selected aptamer sequences undergo an iterative process of point mutations to identify variants that maintain selective binding with enhanced affinity (4). Researchers in Tokyo and Edinburg performed in silico maturation on a DNA aptamer to VEGF165/121. Ten random mutants of the original aptamer were designed using a genetic algorithm for mutations outside of the G-quadruplex region of the aptamer. Resulting sequences were evaluated for affinity using surface plasmon resonance (SPR). The top 5 sequences were then mutated to generate 20 new sequences. Resulting sequences were again evaluated by SPR. The best aptamer candidates were then tested for binding to VEGF in ELASA, using a capture antibody with aptamer candidates for detection. The best modified aptamer showed a 16-fold increase in affinity, reducing the KD from 4.7 nM to 300 pM (11).

While some researchers utilize libraries with modified bases for aptamer selection, modified nucleotide substitutions are also applied post-selection to improve the performance of natural DNA and RNA aptamers. Following extensive modeling of a DNA aptamer to thrombin, researchers in Italy substituted T4 and T13 thymines with 5-fluoro-2’-deoxyuridine residues. The site-specific replacements improved structural stability and aptamer activity (14). Researchers at the City University of New York (CUNY) modified a DNA aptamer to the HL60 myeloid leukemia cell line using 2’-O-methyl RNA. Substitution of 2’-O-methyl RNA for purines and pyrimidines at the 3’ end of the aptamer were most effective at increasing stability without altering aptamer affinity or selectivity (8). More recently, researchers have added lipid-modified bases to the 5’ end of an aptamer to improve in vivo stability (12). 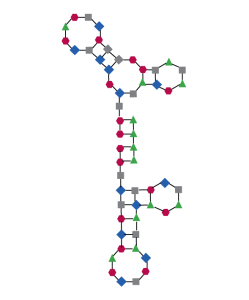 ptamers to increase aptamer-target interactions can often be used to increase affinity and / or selectivity. Researchers in Singapore working with a truncated VEGF aptamer achieved an additional 10-fold increase in affinity by forming a dimer with a single aptamer sequence (11). Researchers at UC-Santa Barbara used DNA microarrays to screen for angiopoietin-2 (Ang2) aptamer pairs following initial selection. They combined complementary aptamers with their ‘best’ aptamer using different size linkers. Designing linker length to match the distance between binding sites on the target molecule has been shown to increase affinity (4). The team generated a bivalent aptamer with a 200-fold enhancement in affinity over the individual aptamers (2). 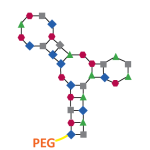 conjugation is a simple way to enhance aptamer stability. Researchers in Korea explored cholesterol conjugation as a means of increasing aptamer stability. Adding cholesterol to the 5’ end of a modified RNA aptamer doubled the in vivo half-life (from ~ 6 to 12 hours) and increased the calculated bodily exposure to drug approximately 8-fold. The aptamer-cholesterol conjugate showed a good dose response and no detectable toxicity in both in vitro and in vivo tests (7). 5’ conjugation to polyethylene glycol (PEG), or PEGylation, is a commonly-used method for extending the half-life of aptamers and aptamer complexes in vivo.  Conjugation to PEG offers protection from reticuloendothelial cells and proteolytic enzymes designed to eliminate foreign molecules and microbes. It can also increase solubility and slow renal clearance from the body. Careful selection of molecular weight and structural modification of PEG can maximize serum stability and minimize immunogenicity (10). For more about pegylation of aptamers visit https://www.basepairbio.com/enhancing-aptamer-stability/.

Aptamer Conjugation for Immobilization and Detection 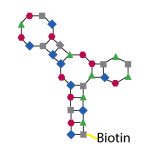 onjugation to biotin is a common technique used for immobilization of aptamers on avidin-based plates or beads. 3’ biotinylation has also been shown to improve aptamer stability. Conjugation to a thiol or amine, often with incorporation of a linker, is used for covalent attachment to a wide range of surfaces (1). Aptamers can be conjugated to a wide range of dyes and agents for imaging, plate-based assays, lateral flow assays, and other applicatons.

Contact Base Pair for more information about aptamer maturation.