Aptamers are increasing being used in a wide range of applications. Like monoclonal antibodies, aptamers offer both selectivity and affinity for specific targets. For this reason, apatamers can be used in almost any application that has traditionally utilized antibodies. For some applications, aptamers offer clear advantages. A brief overview of aptamer use and advantages for just a few of the many potential aptamer methods is provided below.

In affinity chromatography, an affinity ligand is immobilized on a solid support. 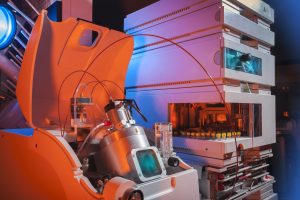 In a traditional dot blot, a mixture of proteins is often transferred to a nitrocellulose or PVDF membrane. The target protein is then bound by a labeled antibody for fluorescent or colorimetric detection. In general, dot blots are simple, fast, and inexpensive. Unfortunately, antibody-based dot blot assays are unstable at high temperatures and are optimized for detection in biological samples. An aptamer-based dot blot assay is more robust and can be designed for point-of-care clinical testing and on-site environmental and industrial analysis. In one aptamer-based dot blot, sample was bound directly to nitrocellulose membrane. Biotinylated aptamer was used for detection along with a streptavidin-HRP / TMB enzyme-substrate system. Assay strips were scanned with the ESE Quant portable lateral flow reader from Qiagen2. In another aptamer-based dot blot, conjugation of aptamers to gold nanoparticles enabled visualization of a protein target without instrumentation1.

The ELISA, or Enzyme-Linked ImmunoSorbent Assay, is based on the use of monoclonal 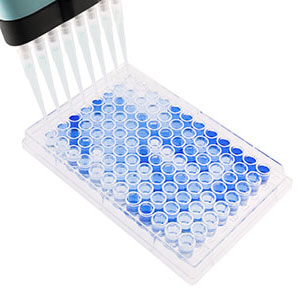 and / or polyclonal antibodies specific to a particular target for capture and / or quantitative detection. Most ELISAs employ a 96-well plate-based format. ELISAs are currently used in a wide range of industries, with wide-spread application for the detection of protein biomarkers in research, diagnostics and therapeutics. While antibody-based immunoassays have proven to be very sensitive and specific, there are some limitations which can be overcome with the ELASA, or Enzyme-Linked Aptamer Sorbent Assay. Unlike antibodies, aptamers can be selected for specific binding to poorly immunogenic and toxic compounds. Aptamers can also distinguish between highly conserved molecules. Chemical aptamer synthesis enables rapid, low-cost production of new batches with low lot-to-lot variability. As with traditional ELISAs, ELASAs can be direct, indirect, and sandwich assays. Several sandwich ELASA assays have been developed at Base Pair Biotechnologies. Biotinylated capture aptamers are typically bound to streptavidin-coated plates. Following incubation with sample and appropriate wash steps, bound analyte is often detected with a FITC-labeled detection aptamer and the use of an anti-FITC-HRP / TMB enzyme-substrate system for colorimetric detection. Other detection platforms are available.

In flow cytometry, single cells, often stained, pass through an intersecting laser beam. Light scatter and fluorescence signal can be used to determine cell size, cell type, state of differentiation, and often the presence of intra- and extra-cellular biomarkers. With Cell-SELEX, a process of using the whole cell for selection, aptamers that bind proteins on the cell surface or integrated into the cell membrane can be properly selected. There are several examples of aptamers being used to detect cancer cells and cancer stem cells. Aptamers to pathogens, including bacteria and virus-infected cells, have been developed for flow cytometry, including aptamers to various strains of a single bacterial species. Aptamers have been applied to quantum dots, silica nanoparticles, and gold nanoparticles for improved sensitivity and intracellular detection. These improved techniques, coupled with the lower cost and enhanced stability of aptamers, make aptamers ideal for flow-based cell analysis and the development of flow-based screening tools for the identification of cancer cell sub-types. , as they can rapidly detect the presence of analyte without wash steps and often without specialized equipment. In the lateral flow assay, sample is applied to the sample pad, then migrates via capillary effects to a pad containing an analyte-specific conjugate, then to a test pad, which often contains a test strip with analyte-specific capture antibody or aptamer and a control strip, which produces signal in the presence of the conjugate whether or not the analyte of interest is present. Gold particles are frequently used for detection in LFAs because they are stable, easy to conjugate, and easy to visualize. The temperature stability of aptamers makes them a good choice for lateral flow assays used in high-temperature environments. They can also be developed under non-biological conditions for preferential binding in urine, saliva, or environmental samples. Aptamers can be raised to poisonous substances and non-immunogenic metabolites and heavy metals to develop a wide range of environmental and quality-control tests.

Labeled antibodies are widely used to bind specific tissue or cell surface markers for visualization. One limitation of the use of antibodies for imaging is sensitivity. Conjugation with multiple fluorescent reporters often affects binding affinity. A second limitation is the bioactivity / immunogenicity of antibodies. Aptamers are easily modified with multiple tags for a wide range of in vivo imaging formats. Aptamers can be fluorescein-tagged for 2-photon imaging, Cy5-tagged for near-infrared imaging, 18F-labeled for positron emission tomography (PET), or 19F-labeled for 19F magnetic resonance imaging (MRI). Due to their small size, aptamers are also less immunogenic. Β55 RNA aptamers have been successfully used to visualize amyloid plaques in human AD brain slices and in vivo PPP/PS1 transgenic mice with no detectable tissue response. Incorporation of multiple fluorescent labels did not interfere with aptamer binding. Read More about Immunohistochemistry with Aptamers.

Live, whole-animal imaging using antibodies bound to near-IR dyes has enabled, to some degree, the non-invasive study of biological processes, disease progression and response to various agents, including potential therapeutics. In vivo, however, antibodies often trigger a biological response that affects the tissue or process being studied. Unlike many antibodies, aptamers are generally non-immunogenic. Because of their small size, aptamers may infiltrate tissues and cells more quickly. Binding of more aptamer molecules to target tissue (vs. larger antibodies) may also increase signal generation and improve imaging sensitivity. Aptamers that emit fluorescent signal only upon conformational change triggered by binding to their target can dramatically decrease background and improve visualization of tumors and diseased tissue versus surrounding normal tissue via in vivo imaging. Learn More

Sensors produce a change in detectable signal upon reversible interaction with a particular analyte. While structure-switching aptamers alone can be used to generate optical sensors, aptamers are often covalently attached to gold-coated electrodes to make electrochemical sensors and conjugated to nanoparticles in plasmon resonance sensors. Because aptamers can be selected against small and toxic compounds in a wide range of matrices, can be conjugated to surfaces without loss of  selectivity / affinity, and can be regenerated or refolded, they are ideal for use in biosensors for a wide range of applications. Biosensors utilizing aptamers are being developed for detection and identification of pathogenic bacteria in bioterrorism, food poisoning, and antibiotic resistance. Aptamer-based sensors are also being generated for sensitive and selective detection of Bisphenol A (BPA), an estrogen-like compound which leaches from some plastics, and other environmental contaminants.   Learn More

Western Blot is a protein-based immunoblot. Proteins in a sample are separated by size via electrophoresis in a polyacrylamide gel. Proteins captured in the gel are transferred, or blotted, on to a nitrocellulose or nylon membrane. A labeled, protein-specific antibody is used to identify the band(s) containing the protein of interest. Molecular weight standards are used to confirm protein identification based on molecular weight. While antibodies have traditionally been used in western blots for a wide range of proteins, aptamers can be applied in this application as well. Base Pair has recently detected penicillin-binding protein 2a (PBP2a), a surface protein expressed on methicillin-resistant Staphylococcus aureus (MRSA), via a colorimetric Western Blot. The ability to select aptamers against viral and bacterial proteins offers new applications for immunoblotting and other research and diagnostic methods.