Monoclonal antibodies play a vital role in research, diagnostics, and therapeutics. Many advancements have been made to improve the performance of monoclonal antibodies, specifically in the therapeutic area. Though antibodies are an ideal choice for many applications, there are some instances where an aptamer may be a better alternative. Some of the key differences between antibodies and aptamers are highlighted below and outlined in the Aptamers vs. Antibodies table.

ional antibody production requires an antigen, a molecule that is identified as foreign and triggers a response by the host’s immune system. The process typically begins with multiple injections of a purified protein.1 Small molecules will not elicit an immune response, so they are not viable targets for traditional antibody production. Because antibodies are initially raised in a live animal, it is also difficult to generate antibodies to a compound that is highly toxic. Aptamers are produced in vitro, so they can be selected to a wider range of targets.

Aptamers can be selected to detect non-immunogenic small molecules and metabolites as well as compounds that are toxic to cells. Aptamers can also be selected for binding to live cells, without knowledge of a specific cell surface target.

Traditional monoclonal antibody development involves several immunizations of a host animal, isolation of antibody-producing cells, and fusion with fast-replicating myeloma cells. This is followed by hybridoma selection and antibody production. Each step is time-intensive, with the entire process realistically taking four to six months. Because antibodies are raised in animals, they are designed to function under physiological conditions.

Traditional aptamer selection is an in vitro process that is typically completed in two to three months, with variations on the selection process being completed even more quickly. Aptamers can be selected to perform in unique buffer conditions or in the presence of specific proteins or chemical compounds; yielding aptamers suited for specific biological, environmental, or industrial applications.  (Read more about aptamer selection.) 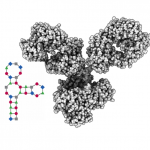 typical IgG antibody is ~150 – 170 kDa, versus ~12 – 30 kDa for a 30 to 80 nucleotide aptamer. Large antibody size limits membrane permeability and can create difficulties when targeting dense tissue.13,18 Unique bi-specific antibodies have been engineered to cross the blood-brain barrier, but traditional antibodies cannot.16 Small antibodies (~90 kDa) have been isolated from llamas, sharks, and camels. Fragments of these small antibodies, termed nanobodies (~ 15 kDa), are showing promise as affinity agents but are not widely accessible.8

Aptamers have demonstrated enhanced access to tissues in both in vivo and in vitro imaging.19 Some aptamers and aptamer complexes have been shown to cross the blood-brain barrier9 and even enter cells. Base Pair has selected aptamers for the ability to enter a particular type of cell.

ey feature of monoclonal antibodies and aptamers is binding to a specific epitope, or region, on a target of interest. Specific epitope binding typically enables specific target detection. Cross-reactivity occurs when an epitope is conserved between two, typically related, targets. Species cross-reactivity occurs when an epitope is conserved between species, such as human and mouse or human and canine. While 100% homology does not need to exist between the targets for cross-reactivity, a high degree of homology is required at the binding epitope. In a study of several ophthalmic antibody drugs, variation of a single amino acid within the binding epitope significantly reduced human VEGF-A antibody binding in mouse and rat models. Human VEGF-B antibody bound in human, mouse, and rat models, with identical sequences at the binding site for human and rat. The mouse epitope differed by a single amino acid that did not affect binding. A difference of four amino acids within a 12 amino acid epitope yielded no species cross-reactivity for the human TNFα antibody.6 Cross-reactivity occurs with both antibody and aptamer affinity reagents.

One drawback to the use of antibodies in therapeutics is immunogenicity – generation of an immune response to the antibody drug and production of anti-drug antibodies. Anti-drug antibodies (ADA) can induce unwanted reactions, alter drug pharmacokinetics, or reduce treatment efficacy by neutralizing drug activity. While the shift to humanized or fully human antibodies has reduced immunogenicity of antibody drugs, it has not been eliminated. Several factors can affect immunogenicity including drug impurities, excipients, dosing regimen, disease type and stage, target cell type, and combinational therapies. In a recent study released by Pfizer, high incidence of ADAs was seen in 27% of patients for human/humanized antibody drugs targeting T cells, compared to 4% for drugs targeting B cells.3

Small DNA and RNA aptamers are inherently non-immunogenic, as demonstrated in several recent in vivo studies involving aptamers.12,19 They are suitable for in vivo use without extensive modification.

The use of DNA or RNA aptamers eliminates potential interference from endogenous antibodies.

Production of monoclonal antibodies is a complex, time-consuming biological process. Fed-batch and perfusion culture processes have been developed to maximize yields and accelerate the bioproduction process14, but culture contamination remains a concern, as an entire batch of material can be compromised. Purification to isolate the antibody of interest and remove residual host cell impurities, DNA, viruses, and other contaminants is another critical step.17 Batch-to-batch consistency in antibody expression and purification is an ongoing challenge in diagnostic and therapeutic applications.

Because aptamers are chemically synthesized, there is no risk of biological contamination and greater batch-to-batch consistency.

tibody hybridomas are typically cryo-preserved in liquid nitrogen. Hybridomas can be maintained over a period of years, but some are genetically unstable. Because non-producing clones tend to overtake producing ones, hybridoma cells can stop producing antibody over time.11 Failure of a liquid nitrogen tank can mean the loss of a precious hybridoma, so off-site and redundant storage of hybridomas is recommended.

Aptamers are chemically synthesized, so only information regarding the aptamer sequence and any modifications is required to maintain long-term access to the aptamer that was originally produced and validated.

Base Pair has discovered aptamers to a wide range of targets for many different applications. Contact Base Pair today to learn more about the selection of aptamers for use in your application.

*Actual time will vary from one project to another