In The August Issue 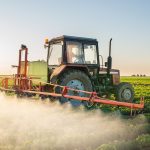 The selection and application of herbicide can have a significant impact on crop yields. With the advent of targeted herbicides designed for resistant crops, the control of herbicide application is more important than ever. Base Pair has completed feasibility of a field-based lateral flow assay to detect residual dicamba, a broad-spectrum herbicide. Commercialization of a field-based test will enable farmers to test for residual dicamba on spraying equipment, reducing the accidental spread of dicamba to non-resistant crop fields. Read the full article. 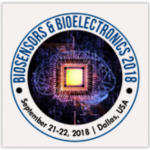 Many difficult targets require highly-technical, time-consuming analysis. While testing options for many targets have previously been limited by the availability of selective affinity reagents, researchers are increasingly turning to aptamers. Aptamers are small, nucleic acid-based affinity reagents that are easily selected in vitro to almost any target. (Learn more about aptamers) Combining selective aptamers to difficult targets with fluorescence-enhancing aptamer conformations offers creative, label-free options for single-step assays that may someday be used as a faster, simpler alternative to current methods.

In a recent publication, researchers at Hunan University in China developed a fluorescence assay for tumor cell detection. The team sought to combine a cell-targeting aptamer selective for hepatocellular carcinoma cells with an aptamer that enhances the fluorescence of Thioflavin-T (ThT) to generate a label-free, one-step fluorescence assay. To start, the stem of each aptamer was truncated, then the aptamer stems were fused. At the optimal stem length, both aptamers retained selective affinity (1).

To make fluorescence dependent on cell binding, a “helper” probe was added to block the ThT binding site and 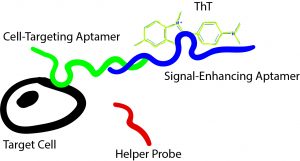 also hybridize to a portion of the stem of the cell-selective aptamer. Once the sequence and length of the helper probe was optimized, target cell binding induced fusion of the two aptamers, release of the helper probe, binding of ThT, and enhanced fluorescence. Fluorescence was measured using an F-7000 fluorescence spectrophotometer. The assay was able to detect as few as 125 cells in 100 μL of binding buffer and 500 cells in 100 μL of 20% human serum (1).

Kanamycin is a widely-used antibiotic. Various foods are tested for kanamycin residues to ensure levels are below regulatory limits. Researchers in Changsha, China recently tested a label-free, “turn-off” fluorescence assay for the detection of kanamycin as a potential replacement for mass spectrometry. The team started with an aptamer selective for kanamycin. They then added two auxiliary probes at the 3’ or 5’ end of the aptamer, forming a G-quadruplex that increases the fluorescence signal of Thioflavin-T (ThT). Binding of kanamycin to the aptamer prevents formation of the G-quadruplex and decreases fluorescence, so signal is inversely proportional to kanamycin concentration (2).

Fluorescence was measured with an F-2700 fluorescence spectrophotometer. The label-free assay had a limit of detection of 0.3 nM and was highly selective for kanamycin, demonstrating no interference from other common antibiotics. Though detection was demonstrated in both buffer and in milk samples, the milk samples were purified prior to spike and recovery testing (2). Though it may still require sample pre-processing, the label-free, single-step test is significantly faster and simpler than mass spectrometry analysis. Targeted, aptamer-enhanced fluorescence is an exciting new platform for quality control testing.

Aptamers can be selected for a wide range of targets for label-free detection. Unlike antibodies, which are typically raised in an animal model and require an immunogenic response, aptamers are selected in vitro and chemically synthesized. Aptamers are easily selected for binding to specific small molecules which are non-immunogenic or toxic compounds that are incompatible with traditional antibody development. The combination of selective aptamers and fluorescence-enhancing aptamers or probes can be applied to generate label-free, one-step assays for almost any target, from small molecule drugs to environmental / agricultural contaminants to cell surface proteins. Base Pair has generated a number of successful aptamers to small molecules, toxins, and cell surface markers.

Contact Base Pair today for more information on selection of aptamers.