Aptamers and Opioid Drugs of Abuse

Opiates and opioids are frequently prescribed to treat pain. These drug molecules bind to opioid receptors and block the transmission of pain signals within the central nervous system and gastrointestinal tract. [1] At the same time, they drive up levels of dopamine, a hormone producing an addictive feeling of euphoria. [2] Natural opiates (codeine, morphine) are directly derived from the opium poppy. Semi-synthetic opioids (heroin, hydrocodone), are chemically synthesized, but include natural opiate derivatives. Some opioids (methadone, fentanyl), are completely synthetic, but have a similar effect to that of natural opiates. [1] 100 times more potent than morphine and 30 to 50 times more powerful than heroin, prescription fentanyl is sometimes prescribed to cancer patients and is routinely used in anesthesia. [2]

According to a CNN article earlier this month, the CDC is reporting overdoses in the U.S. from illicit opioids rose dramatically in 2015. Overdose deaths from synthetic opioids were up 73% to 9,580. Most were related to illicit fentanyl. 17,536 deaths involved prescription opioids and 12,990 deaths were related to heroin. [2] In many cases, heroin is tainted with other drugs or additives used in production. Levamisole is a contaminant in about 69% of the cocaine used in the U.S. A recent publication describes the potential effects of levamisole, including kidney toxicity (nephrotoxicity), destruction of blood vessels (cutaneous vasculitis), and immune deficiency caused by severe reduction of neutrophil formation in bone marrow (agranulocytosis). [3] An excerpt from a June 24th Fox news story reads, “Officials in New Haven have declared a public health emergency following a string of overdoses linked to a batch of heroin mixed with fentanyl.” [4] Similar stories are being written throughout the U.S.

According to a CNN news report and research letter published in JAMA Pediatrics on December 12, 2016, the incidence of neonatal abstinence syndrome (NAS), or opioid withdrawal in newborns, increased 5-fold in the U.S. from 2000 to 2012 [5,6] Recent increases in opioid deaths and NAS highlight the need for improved screening. Tests for detecting a wider range of opioids and common contaminants could assist law enforcement in the identification of “tainted” drugs, assist health care providers in identifying drug compounds or “cocktails” that were ingested or are present in newborns, and assist family members in diagnosing drug dependence. While there are several FDA-approved home use tests for drugs of abuse, including cocaine, methadone, morphine, and oxycodone, tests for many synthetic and semi-synthetic opioids are lacking. [7] In January 2014, law enforcement in some towns began administering naloxone, to reverse opioid effects in cases of overdose. [8] In March 2014, the FDA approved a hand-held device for administration of naloxone by family members. [9] Identifying opioid use can enable access to early treatment.

Developing specific reagents and tests for detecting opioids and opioid metabolites has proven difficult and time-consuming. While research abounds with antibodies to opioid receptors, antibodies to opioids themselves are few and far between.  Because opioids are small molecules, their immunogenicity is generally low and techniques for altering small molecules to induce antibody production often fail or negatively affect antibody specificity. [10,11,12] In recent years, researchers have been turning to aptamers, chemically-synthesized single strands of DNA or RNA that form unique secondary and tertiary structures to selectively bind a wide range of targets. [13] In 2006, researchers at the University of Illinois developed a simple test for cocaine in bodily fluids using aptamers. [14] Since then, similar tests for common drug compounds, such as methamphetamines, have been published. [15,16] In response to the growing use and abuse of a wider range of opioids, Base Pair has successfully developed a number of aptamers that selectively bind to opioids and opioid metabolites. Two of these molecules are described in the product highlights section below.

​Base Pair performed an aptamer selection project for the National Institutes of Health using a urine-like synthetic buffer formulation to generate aptamers with high selectivity and affinity to noroxycodone and norhydrocodone, which also bind in natural urine. 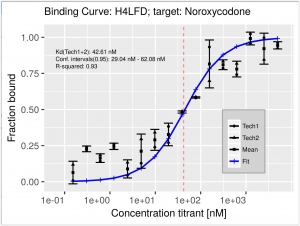 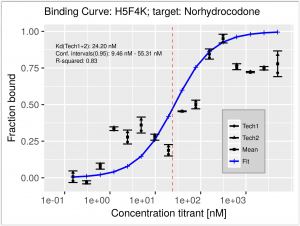 ​Base Pair has significant experience successfully generating aptamers that bind selectively to small molecules. Contact Base Pair today at info@basepairbio.com or 832-230-5518 for more information.