The many advantages of aptamer affinity reagents over antibodies are compelling.  The first choice in the aptamer discovery process is whether to select for DNA or RNA aptamers.  While both DNA and RNA aptamers have been proven to be effective in a wide range of applications, there are some key differences that may help you to decide which modality is best for your application.

Early aptamer studies focused primarily on RNA. It is generally accepted that RNA aptamers form more diverse and intricate three-dimensional structures, enabling a greater number of conformations compared with DNA Aptamers (1,2). Though RNA aptamers may form smaller structures than DNA aptamers of the same number of oligonucleotides, researchers have developed aptamers that can infiltrate tissues and cells using both RNA and DNA (2,3). Recent studies have revealed several two-dimensional and three-dimensional features that enable selective binding affinity and stability in DNA aptamers, including hairpins, bulge loops, internal loops, and G-quadruplex folds4. While both DNA and RNA aptamer libraries have yielded highly-selective aptamers to a wide range of targets, including highly similar compounds (5,6), additional research is required to determine if enhanced structural diversity, through the use of RNA or customized libraries, is required to generate high-affinity aptamers capable of detecting compounds that differ by a single amino acid or functional group.

While structural diversity is considered a good thing when searching for a potential binding partner, it may also affect the homogeneity and activity of a particular selected aptamer. Researchers studying a single RNA aptamer to theophylline determined that the unbound aptamer formed eight different two-dimensional conformations, only four of which were conducive to ligand binding. Studies of ligand binding, metal ions, and aptamer structures showed that only 58% of the available aptamer could bind theophylline in the presence of 10mM Mg2+ and only 25% could bind without it (7). Researchers investigating a DNA aptamer as a re-myelination agent found the aptamer to adopt a single conformation at salt concentrations comparable to a polyacrylamide gel. In solutions containing Na+ ions, the aptamer adopted an antiparallel G-quadruplex conformation. Upon addition of 4.7 mM K+ ions, the aptamer switched to a parallel G-quadruplex, believed to be the preferred conformation8. Additional studies are required to investigate differences in homogeneity between DNA and RNA aptamers, both in vitro and in vivo, under varying conditions. Understanding and optimizing homogeneity and structural stability will be of particular importance for aptamers developed as therapeutic agents, drug delivery agents, and diagnostic reagents.

Native DNA aptamers are more stable than RNA aptamers. The in vitro half-life of an RNA aptamer in plasma is a few seconds, versus 30 to 60 minutes for a DNA aptamer (9–11). RNA in general serves as a transient messenger and is chemically unstable due to a 2’ hydroxyl group. This 2’-OH makes RNA susceptible to hydrolysis, especially in alkaline solutions1. Further, the presence of the 2’-OH allows for the catalysis of RNA strand scission by prevalent endoribonucleases such as RNase A (12–14). For this reason, most RNA aptamers are chemically modified, especially at the 2’-position of pyrimidines, through library design or during selection amplification, to enhance stability. Once modified, such RNA aptamers can equal or surpass the stability of native DNA Aptamers (1–3). While the stability of various RNA species has been well-studied (see Houseley and Tollervey for an excellent review #14), at Base Pair we have performed a very specific study of the stability in human serum of unmodified and modified DNA aptamers with a specified length of 32 nucleotides. Specifically, we studied the stability of Base Pair’s collagen aptamer, product number ATW0002, and our fibronectin aptamer, catalog number ATW0008, at 37°C over a period of up to 14 days. Five versions of each aptamer were also studied: Unmodified DNA 5’ biotinylated aptamer 3’ biotinylated aptamer 5’ inverted dT-aptamer-3’biotin 5’ biotin-aptamer-3’inverted dT As demonstrated by the representative Figures 1 and 2 corresponding to unmodified DNA versus 5’-biotin-3’-inverted dT, modification can extend the DNA half-life from hours to days.

There are a growing number of examples of both DNA and RNA aptamers that have been modified to improve aptamer stability and performance under specific conditions (15,16). Determination of stability requirements and design of appropriate modifications for enhanced stability are key components of custom aptamer discovery.

Aptamers have been successfully selected for a wide range of applications, including ELISA-like assays, pull-down assays, flow cytometry, immunohistochemistry, drug delivery, and biosensors. For most applications, there are published reports demonstrating feasibility with both DNA and RNA aptamers. The primary exceptions to this include aptamers for the regulation of gene expression, modeled after naturally-occurring riboswitches, and aptamers for in vivo detection of RNA expression. 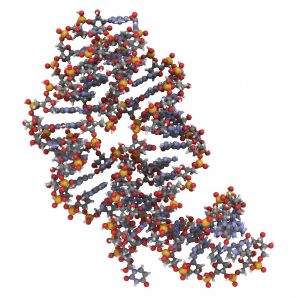 Naturally-occurring riboswitches have been found in the non-coding regions of mRNAs in bacteria. Upon binding of a specific metabolite, the riboswitch undergoes a conformational change that affects gene expression (17). Natural riboswitches consist of two domains. The sensing or aptamer domain recognizes and binds a particular analyte, often a small molecule metabolite within the organism. Following a conformational change upon analyte binding, the regulating domain can affect gene expression, pre-mRNA splicing, or translation, depending upon the riboswitch. Researchers are developing synthetic, aptamer-based riboswitches to monitor and regulate gene expression in a similar fashion (18,19). The incorporation of “light-up” RNA aptamers is being used to detect and monitor specific promotor activity in yeast. While signal-to-noise is not yet sufficient in some in vivo systems, enhanced light-up aptamers and FRET-based aptamer constructs with improved signal-to-noise are being explored for the in vivo imaging of transcription in eukaryotic cells (20).

Though DNA aptamers are gaining popularity due to the speed and cost savings of DNA aptamer selection and the inherent stability of DNA vs RNA, specific projects will require the unique functionality of RNA. Whether DNA or RNA oligonucleotides are chosen, library design based on binding and stability requirements, careful choice of aptamer selection methodology, consideration of both positive and negative selection strategies, and buffer formulations to best meet final aptamer requirements are essential for success.

Looking for aptamer design suggestions for an upcoming project? Request a free project proposal or submit your questions today.