Under present funding from the National Cancer Institute, we have demonstrated successful assays using several aptamer-based, ELISA-like formats (see figures below, CLICK IMAGES TO ENLARGE).  For instance, in a “direct” or “dot-blot” format, protein analyte is spotted in several concentrations on a membrane and detected directly by a biotinylated aptamer: 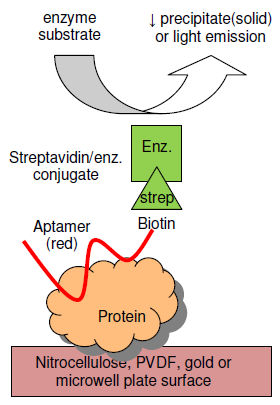 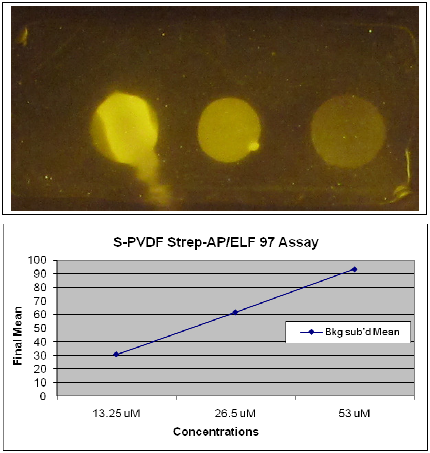 While every protein:aptamer interaction can differ somewhat, we have detected as little as 10 nM concentrations of protein spotted in 1 microliter, or as little as 10 femtomole total protein analyte.

Alternatively, we have also demonstrated the following two analogues of typical “capture” or “sandwich” ELISAs.  With the aptamer as capture element:

Or with the aptamer as the molecular recognition element in free solution:

Below are representative results for such related approaches:

Using such “capture” or “sandwich” approaches, we have thus demonstrated complete, modular replacement of antibodies with aptamers.  At present we are developing aptamer pairs thereby completely eliminating antibody components altogether.  Given the other advantages of aptamers over antibodies in numerous settings, we find these data quite compelling for potential adopters of aptamer technology.