According to the World Health Organization, the top 31 foodborne hazards cause an estimated 600 million illnesses and 600,000 deaths each year. (13) The U.S. Centers for Disease control estimates more than 48 million illnesses, 128,000 hospitalizations, and 3,000 deaths are caused by foodborne pathogens in the U.S. alone. (1) Foodborne illness is a serious concern in the food industry and has presented a major problem for several food manufacturers and restaurants in recent years. The Chipotle food chain was linked to several outbreaks of foodborne illnesses in 2015 caused by exposure to E. coli and Salmonella bacteria and the Noravirus. (2) Sales at established Chipotle restaurants dropped more than 14% in the last quarter of 2015. (4) While it would be impossible to eliminate every instance of foodborne illness, increased traceability of food from the farm to the consumer, better food-handling procedures, and improved testing for foodborne pathogens are needed to reduce the incidence of foodborne illness worldwide.

Salmonella bacteria is estimated to infect more than 1.2 million people in the U.S. each year.

In most cases, illness is temporary and unreported, but in 2% of cases (23,000) patients are hospitalized and in ~.04% of cases (420) infection is fatal. (1) Though Salmonella is most commonly linked to undercooked eggs and meats, other foods and water can be contaminated. In 2009, PCA peanut butter contaminated with Salmonella sickened 714 and killed 9. In 2015, Salmonella linked to Mexican cucumbers sickened 907 and led to six deaths. (5, 8) Researchers in China used Salmonella typhimurium bacteria to identify highly selective aptamers for the bacteria. One selected aptamer was applied in a fluorescent, self-sandwich assay utilizing amine-functionalized magnetic nanoparticles. It selectively detected 25 colony-forming units of S. typhimurium. (3) Researchers are continuing to pursue aptamers for development of sensors that can quickly detect low levels of S. typhimurium bacteria in complex food samples.

According to the U.S. Centers for Disease Control, the toxin-producing I157:H7 E. coli strain infects more than 96,000 people in the U.S. each year, sending more than 3,000 to the hospital and killing 31. (1) Common sources of E. coli infection include under-cooked ground beef, unpasteurized milk, and fruits / vegetables that have come in contact with the intestinal bacteria on the farm or during food peparation. In 2015, the E. coli O26 strain infected 53 Chipotle customers in 9 states, suggesting an infected ingredient was shipped to multiple sites. Because they are often not cooked or well-cleaned, tomatoes, lettuce, and cilantro are the most likely suspects, though the source of the Chipotle E. coli outbreaks was not confirmed. (2) Researchers in Korea developed selective aptamers to the verotoxin-producing E. coli O157:H7 strain. (6) Selective aptamers can be applied to field-based sensors for faster, more accurate detection of various E. coli strains. Improved food handling and testing of outgoing and incoming food shipments would help to decrease these types of outbreaks.

While Listeria bacteria affects fewer than 1,700 people in the U.S. each year, in more than 15% of instances it is fatal. (1) In the late ‘90s, infected hot dogs sickened 100 and killed 14. In 2011, infected cantaloupe sickened 147 and killed 33. (5) Researchers at Guangdong Ocean University developed an aptamer-modified sensor for detection of 100 to 1,250 colony-forming units/mL of Listeria in just 10 minutes. (14) Vibrio vulnificus bacteria affects fewer than 210 people in the U.S. each year, but the fatality rate is even higher, at 34%. Though treatment is available, some infections quickly lead to sepsis and necrotizing skin infection. Most infections stem from raw shellfish, including oysters and clams, and open wounds exposed to warm salt water. (11) Application of aptamer-based sensor technology would enable improved environmental and food screening and real-time pathogen identification, reducing infection and speeding treatment.

While some viruses are bloodborne or airborne, others are easily transferred through contact 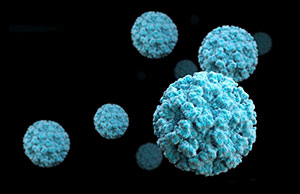 with infected surfaces or contaminated food. The most common foodborne virus is the Norovirus, with estimates of 20 million infections leading to 56,000 hospitalizations and 571 deaths annually in the U.S. alone. (1) In 2014, the 234 cases of Norovirus from Chipotle in California and the 140 cases from Chipotle near Boston College were linked to sick workers preparing food. (2) Researchers at North Carolina State University recently developed aptamers to the Norovirus. Sensitivity to norovirus denaturation was tested for an aptamer, a norovirus receptor (HBGA), and a monoclonal antibody. The aptamer and receptor did a much better job of discriminating between infectious and non-infectious particles. The aptamer was also reactive with multiple norovirus strains. Similar aptamers could be applied to test for Noroviris infection and confirmation of inactivation. (9)

Parasites including toxoplasma gondii and taenia solium are often transferred through food infected with fecal matter containing the parasite and are much more prevalent in under-developed countries with poor sanitation. Toxoplasma gondii is a small, single-celled parasite. It is estimated that 11% of the U.S. population over five and up to 95% of some populations worldwide are infected. Often transmitted through infected food or cat litter, Toxoplasma gondii typically doesn’t generate symptoms in healthy individuals, but can cause stillbirth if a pregnant woman becomes infected and can cause illness in immune-compromised individuals. (10) The CDC estimates 173,000 illnesses, 8,800 hospitalizations, and 656 deaths from Toxoplasma gondii in the U.S. each year. (1) Researchers in China developed a group of aptamers for selective detection of antitoxoplasma antibody. The dual-aptamer-based sensor showed improved detection of infection and reduction in false positives compared to the standard antibody-based assay. (7)

Taenia solium, the pork tapeworm, is spread through ingestion of undercooked meet containing larval cysts. Ingestion of eggs in fecal matter from individuals infected with the pork tapeworm can lead to neurocysticercosis, an infection in the brain and spinal cord that can cause seizures and headaches and even stroke or death. The World Health Organization estimates that 15 % or 15 million of the 50 million cases of epilepsy worldwide are caused by neurocysticercosis. (12) In a recent collaboration, Base Pair generated a selective aptamer for detection of T. solium in fecal homogenate samples.

Aptamers offer several unique properties which make them ideal candidates for detection of foodborne pathogens. They are easily selected against small and / or toxic molecules and organisms. They can be highly selective for specific bacterial strains and can better differentiate between active and inactive viruses. Because aptamers are chemically synthesized and easily modified, aptamer production is straightforward and highly reproducible from batch to batch without the regulatory hurdles associated with bioproduction. Aptamers are more stable than antibodies at elevated temperatures and are not susceptible to interference from the plasma proteins and antinuclear antibodies that can cause false positives in traditional antibody-based ELISAs. (7) Aptamer-based sensors and assays are currently being developed to generate faster, simpler, more stable detection methods for a wide range of infectious agents.

Base Pair has experience developing aptamers to viruses, toxins, parasites, and bacteria/bacterial proteins in several sample matrices. Contact Base Pair for more information on aptamer capabilities and custom aptamer development.