May 2018 – Aptamer Targeting of Brain Tumors: Crossing the Blood-Brain BarrierJuly 2018 – In Vivo Imaging with Aptamers

In The June Issue

Did you miss the recent article on aptamer stability?

Read the full article at the new Aptamer Stability page. Aptamer stability is an important issue when selecting aptamers for serum-based diagnostics, in vivo imaging, and therapeutics. This article reviews several aptamer modifications that can be applied to improve aptamer stability and availability.

Base Pair is pleased to welcome Paula Porter as a senior operations associate. Paula has a B.A. in philosophy from Boston University and a master’s degree in neuroscience from the University of Utah. With experience in administrative and laboratory management roles, Paula will be instrumental in streamlining the processes at Base Pair to increase productivity and customer satisfaction.

Lateral flow assays are based on the movement of sample 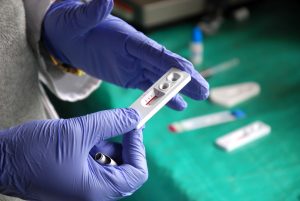 across a nitrocellulose membrane containing distinct regions, often including areas for sample deposition, conjugate reagents, pre-bound capture reagents, and an absorbent pad to cause wicking or movement across the membrane (1). LFAs offer fast, portable, accurate detection that is both simple and cost-effective, enabling use in a wide range of settings. LFAs are currently used in a number of different industries from consumer testing (home pregnancy tests), to point-of-care diagnostics (Hepatitis B test) to food and beverage quality screening (including tests for residual antibiotics, industrial contaminants, and biological contaminants) (4).

While antibodies have been used successfully in LFAs for many years, they do have limitations. Unlike antibodies, aptamers can be selected for binding to almost any target, including non-immunogenic small molecules and toxic compounds. They are easily modified at low cost for oriented immobilization and detection. Aptamers also offer improved temperature stability, enabling ambient shipping and extended shelf life. Chemical synthesis offers controlled, low-cost production with exceptional batch-to-batch consistency (2). Competitive lateral flow assays require a single affinity reagent and binding epitope, ideal for small molecule detection. They can combine the unique ability to select aptamers to small and / or toxic molecules with the speed and simplicity of LFAs.

Researchers in China have developed a competitive aptamer-based LFA to zearalenone (ZEN), a mycotoxin produced by fusarium roseum. This fungus can be found in moldy corn, wheat, barley, oats, and other cereals as well as some dairy products. Ingestion of harmful levels of ZEN can cause reproductive disorders and digestive dysfunction, making ZEN testing of high importance in the food industry. Because this test would ideally be performed on-site at food storage and food processing centers, the goal was to develop a more stable, aptamer-based LFA with selectivity and sensitivity comparable to the existing antibody-based LFA. The team utilized an anti-ZEN aptamer conjugated to gold nanoparticles for selective detection (5). 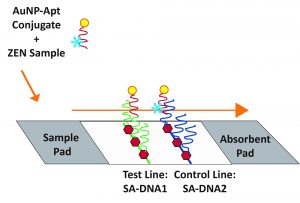 The LFA consisted of a sample pad, test line, control line, and an adsorbent pad to generate wicking of the sample across the nitrocellulose membrane. (See figure above.) For this assay, biotinylated DNA-streptavidin complexes were deposited at the test and control lines. The DNA sequence at the test line was ONLY complementary to the aptamer-conjugated gold nanoparticles (AuNP-Apt) when ZEN was not bound. The DNA sequence at the control line was complementary to the AuNP-Apt whether ZEN was bound or un-bound. Higher levels of ZEN in the sample decreased the amount of free AuNP-Apt and reduced signal at the test line. At concentrations above 200 ng/mL, signal at the test line completely disappeared. Signal at the control line was unaffected by ZEN concentration. The resulting test was completed in 5 minutes and had a ZEN detection range of 5 – 200 ng/mL, slightly superior to the existing antibody-based LFA with a sensitivity of 15 ng/mL. The aptamer-based LFA showed no cross-reactivity with 500 ng/mL of DON, OTA, fumorisin B1 (FB1), and aflatoxin B1 (AFB1). Though this format requires pre-combination of the sample and conjugate, it is still a simple, effective method (5).

A team consisting of researchers from Spain, the UK, and Saudi Arabia developed two different LFA methods for the detection of lupin, a plant additive in many foods that can cause mild to severe anaphylactic reactions. In the first lateral flow test, aptamer-conjugated gold nanoparticles (aptamer-AuNP) were pre-incubated with sample for 2 minutes, then added to the test strip. Three minutes following addition, the strip was imaged with a smartphone and analyzed. At the test line, free aptamer-AuNP bound to immobilized Beta-conglutin, a subunit of lupin. At low lupin concentrations the majority of conjugate binds at the test line, creating strong signal at the test line, with a small amount migrating and binding at the control line. At high lupin concentrations, there is little binding and signal at the test line, but binding and signal at the control line. The LFA was able to detect 1.1 fmol of beta-conglutin (3).

Base Pair Aptamer Selection for LFA

Several variations of sandwich and competitive LFAs have been developed to accommodate a growing range of targets. With custom aptamer discovery, a lateral flow assay can be developed for almost any target, including small molecules, metabolites, toxins, proteins, and other molecules. Base Pair has discovered aptamers to a number of small molecules and has selected aptamers to differentiate between highly similar compounds, such as THC (the active ingredient in marijuana) and its metabolites. LFA projects involving aptamers to small molecules of interest in several different areas are currently ongoing at Base Pair.

Contact Base Pair today for more information on selection of aptamers for LFA or aptamer-based LFA development.