May 2017 Newsletter – Aptamers for Detection of Pathogenic Bacteria

Aptamers are being used in place of antibodies in a growing number of applications. This webinar will give a brief overview of aptamers and discuss advancements in aptamer selection, key differences between aptamers and antibodies, aptamer advantages, and the successful use of aptamers in research, diagnostic, and therapeutic applications.  Register to attend or request a copy of the presentation.

Schedule a meeting with a Base Pair Scientist at the American Society of Microbiology annual meeting from June 1st to 3rd in New Orleans, Louisiana, USA.

If you haven’t been to the site lately, take a few minutes to check out our new look. Base Pair is committed to building an industry-leading resource for aptamer research and applications. Visit us at www.basepairbio.com.

Aptamers for the Detection of Pathogenic Bacteria

Over the years, we have developed a wide range of antibiotics to treat bacterial infection. In response, bacteria have developed several mechanisms of antibiotic resistance. In many cases, an existing enzyme is modified to react with and inactivate the antibiotic (8). While this doesn’t happen overnight, repeated exposure to an antibiotic increases the likelihood that a strain will develop resistance. Resistant strains are easily spread through food, human contact, and the environment and one strain of bacteria can often transfer resistance to other strains (10). The widespread use of antibiotics in the health field and long-term over-use of antibiotics in food production, particularly in India and China, has caused antibiotic resistance to increase at an alarming rate. In 2013, the CDC estimated that more than 2 million people in the U.S. were infected by antibiotic-resistant bacteria, resulting in more than 23,000 deaths (2). As individual strains gain resistance to new antibiotics, the options for treatment are rapidly diminishing and the reality of an untreatable bacteria is looming.

The CDC has identified three strains of antibiotic-resistant bacteria, Clostridium difficile (C. diff), carbapenem-resistant Enterobacteriaceae (CRE), and Neisseria gonorrhoeae, as “urgent threats.” (2) Enterobacteriaceae are found in normal human intestines, but cause serious infection when they spread to other areas, including the urinary tract, or enter the bloodstream. CRE, the strain resistant to the carbapenem class of antibiotics, is associated with a mortality rate of more than 40%. (10) In some cases, the antibiotic colistin is the last line of defense. The discovery of a strain of e. coli producing a plasmid containing the mcr-1 gene for colistin resistance has many worried, as this can be easily spread to other strains of bacteria and eventually transferred to CRE. (9) In August of 2016, a strain of Klebsiella bacteria resistant to 26 different antibiotics led to a death in Nevada. It is believed that the strain was acquired in India. While fosfomycin, a “last-resort” drug approved in Europe, may have been a potential treatment, clinicians are running out of options for many multi-drug resistant strains. (7) Twelve additional bacterial strains, including drug-resistant Salmonella Typhi, drug-resistant Shigella, Methicilin-resistant Staphylococus aureus (MRSA), drug-resistant Staphylococcus pneumoniae, and drug-resistant tuberculosis have been classified as “serious threats” by the CDC. (2) Over 49 million people worldwide were successfully diagnosed and treated for tuberculosis from 2000 to 2015. The World Health Organization estimated 480,000 cases of multi-drug resistant tuberculosis in 2014 leading to 190,000 deaths (11). The spread of resistance is a growing concern.

While clinicians can often recognize symptoms of infection, identification of the specific type of bacterial infection and associated antibiotic resistance is critical for prompt treatment with the correct antibiotic. Targeted use of specific antibiotics serves two important purposes. It improves clinical outcomes by offering more effective treatment more quickly and it reduces the over-use of certain classes of antibiotics, slowing the development of resistance. Current methods of detection and characterization are often slow. A common test for the detection of MRSA involves 24-hour cell culture. Reducing test time can lead to false negative results. (3) Antibody-based tests, such as ELISA, can sometimes yield false positives due to antibody cross-reactivity. More sophisticated characterization methods often require expensive laboratory equipment and/or sample pre-treatment. The tests can be expensive and time-consuming and are not accessible in some areas.  (6) The CDC has identified the development of new and improved diagnostic tests as a critical initiative. (2)

Aptamers are short, single strands of DNA or RNA that form three-dimensional structures enabling selective binding. One unique advantage of aptamers is the ability to quickly select aptamers for binding to toxins and pathogens. Unlike antibodies that are produced by living organisms, aptamers are selected from millions of single strands of DNA or RNA that are evaluated for binding to specific targets. (5) C. diff. is a bacteria found in normal intestines. At abnormally high levels (often caused by elimination of competing bacteria through antibiotics), it can cause serious infection. The CDC estimates more than 250,000 infections and 14,000 deaths in the U.S. each year. (1) An increase in the number of recurring infections following antibiotic treatment has led to the development of fecal transplant for the treatment of C. diff. Researchers at Chongqing Medical University developed a disposable biosensor using structure-switching aptamers to the toxins produced by C. diff. The fecal sample test was rapid, selective, stable, reproducible, and accurate. (6) The use of aptamers that change conformation upon binding to a target can be used to generate a change in current or production of colorimetric or fluorescent signal that is easily and almost instantly detected in complex samples.

Researchers at Jiangnun University developed a fluorescent bioassay using selective aptamers to Salmonella typhimurium. Rather than targeting a specific surface protein or toxin for selection, researchers used live bacteria for aptamer selection. Nine rounds of selection, or SELEX, were conducted using 108 live cells for each round. Six alternate strains of pathogenic bacteria were used in rounds three and five for negative selection to increase the selectivity of the resulting aptamers. One aptamer, ST2P, was chosen for bioassay development. Biotinylated ST2P aptamer was immobilized on avidin-coated magnetic nanoparticles. Bound bacteria was detected with FAM-labeled ST2P aptamer. Fluorescent signal generation was proportional to bacteria concentration and the limit of detection was 25 cfu/mL. (4) Identification of a specific target, or cell surface protein, is not required for aptamer development. Whole cells, and even live bacteria, can be used to select aptamers. The PBP2a/MRSA-specific Base Pair aptamers discussed in the article below show affinity for both the PBP-2a recombinant protein and MRSA bacteria.

As researchers worldwide work toward the development of novel antibiotics to fight increasingly resistant bacterial strains, the development of improved methods of detection and characterization remain a priority. Aptamers with selective binding to small and toxic compounds and the ability to differentiate between very similar molecules are ideal candidates for assay development. Structure-switching aptamers can facilitate rapid detection in complex samples. Aptamer stability in a wide temperature range enables the development of simpler, more cost-effective field-based tests required for improved diagnosis and tracking of unique pathogens. (5)

Staphylococcus aureaus is a common bacteria associated with skin infections. The CDC estimates that 1 in 3 people carry the bacteria in their nose without infection, and 2 in 100 carry MRSA, methicillin-resistant Staphylococcus aureus. The bacteria is acquired through contact with an infected wound or by touching an object that has been in contact with an infected wound. (3) Failure to properly diagnose and treat a staph infection can lead to blood infection and sepsis. While there are currently antibiotics that can be effective in treating MRSA, the CDC reported more than 80,000 MRSA infections and 11,000 MRSA-related deaths in the U.S. in 2013. (2)

The Base Pair PBP2a/MRSA aptamers were selected from a 32-mer DNA library using recombinant penicillin-binding protein 2a, PBP2a. Following sequencing and bioinformatics analysis aptamer ATW0032 was chosen and used to demonstrate detection in a lateral flow assay (LFA). PBP2a protein from MRSA was spotted directly on a standard nitrocellulose lateral strip. BSA was spotted as a negative control (See A in figure below). The strip was then dipped into a solution of 200 nM biotinylated anti-PBP2a/MRSA aptamer ATW0032. Following ~2 minutes of flow/binding time the strip was  dipped into a solution of streptavidin-gold conjugate for detection of aptamer binding. Before colorimetric development, a Cy5-labeled version of aptamer ATW0032 was used to directly detect the PBP2a spot. The strip was imaged using a GenePix 4000B microarray scanner (See C in figure below). Visualization of the PBP2a spot  following colorimetric development is shown in B of the figure below. Base Pair PBP2a/MRSA aptamer ATW0032 was specifically selected to have a fast on-rate, ideal for LFA applications. An independent research group has also demonstrated the selectivity and LFA-compatibility of the ATW0032 PBP2a/MRSA aptamer in an aptamer-phage LFA assay. (1) 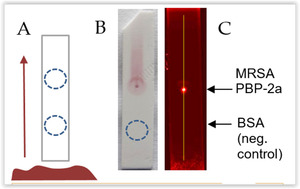 While the lateral flow test above was a simple proof-of-concept, many variations on the LFA and other assay formats are available for development through Base Pair. Please contact us for information about aptamer discovery & development and aptamer-based assay development.