Like many companies, Base Pair Biotechnologies devotes significant and continuing effort to updating its strategic plan. We are pleased to mark the end of our third year as an independent company by sharing our new Mission Statement with you, our valued customers:

Through experience, technology, collaboration, and education, Base Pair Biotechnologies will be the leading worldwide authority and provider of effective aptamers – “Aptamers that Work” – for the scientific and business community.

This new Mission Statement emphasizes the company’s continued focus on scientific and technological excellence, coupled with customer collaboration and education. Innovation drives our scientists to continuously improve the way in which we design aptamer screens. Proprietary, new software algorithms power our ability to identify novel aptamer sequences and structural motifs.New methods developed and optimized over the past year in our laboratory allow us to not only develop aptamers directed against as many as thirty different targets at the same time, but also to design screens that identify aptamers recognizing overlapping sets of targets or that selectively recognize a single target while ignoring others. Finally, our new methods allow us to select for aptamers directed against your target, in the very same type of sample that you would like to use for your eventual assay, avoiding matrix background and non-specific binding problems.

Please join us in celebrating the completion of our third year by letting us know how we can help you – whether you are seeking an affinity agent for an internal research project, designing a diagnostic test or pursuing a new therapeutic agent. We are here to help you succeed. 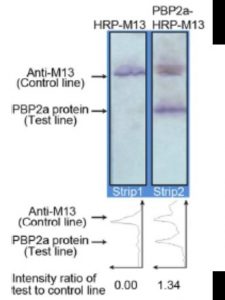 Early detection, enabling early intervention, is a critical goal for infectious disease agents and sensitive assays are crucial for early detection. One of Base Pair’s aptamers (catalog number ATW0032) targeted against penicillin binding protein 2a ,the protein responsible for the antibiotic resistance of methicillin resistant Staphyloccus aureus (MRSA), , is featured in a recently accepted publication by Adhikari et al. [1] in this month’s issue of Analytical Chemistry. In the paper entitled, “Aptamer-phage reporters for ultrasensitive lateral flow assays” the authors utilize an innovative combination of extensively labeled phage particle reporters and aptamers for molecular recognition and improve the sensitivity of 2 lateral flow assays for MRSA by ~100-fold.

While it is generally thought that because of their small size, DNA aptamers are univalent and thus have lower affinities and faster off rates than antibodies, this may not be the case.  In an article published in RSC Advances, Wang et al. [2] utilized molecular modeling to understand observed experimental performance of a Base Pair aptamer directed against tetracycline, as well as a previously published aptamer directed against the same target.  Interestingly, through modeling the authors predict that both aptamers are multivalent for tetracycline, and that each likely have 3 binding sites for the small molecule.  This may be a generalized phenomenon for tight binders and Base Pair would be interested in hearing from researchers who have observed similar results. 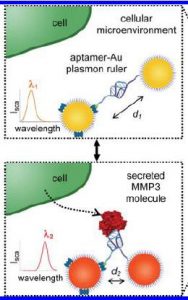 In June of 2015 Somin Lee et al. of Lawrence Berkeley National Laboratory published a paper in ACS Nano Letters entitled, “Reversible Aptamer-Au Plasmon Rulers for Secreted Single Molecules” [3].  Plasmon rulers are pairs of gold nanoparticles that are coupled via a linker.  They exhibit a shorter wavelength light scattering peak when further apart and longer wavelength light scattering peak when closer together.  The distance between the particles can be measured as a function of scattering wavelength, thus creating a ruler.  By attaching two particles together through a DNA aptamer, Lee and colleagues were able to create a plasmon resonance based sensor for aptamer binding.  The Base Pair aptamer ATW0062, which recognizes matrix metalloproteinase-3 (MMP-3) was used to link two gold nanoparticles together.  In order to facilitate synthesis, Base Pair provided the aptamer with a thiol on one end and a biotin on the other end.  Using the resulting nanoparticle-aptamer-nanoparticle constructs, the authors demonstrated detection of MMP-3  in cell culture with single molecule sensitivity and full reversibility of the sensor.   Unlike fluorescence-resonance energy transfer (FRET), such a sensor can be used to continuously monitor dynamic changes in biological systems without concern for photobleaching.