and opioids are frequently prescribed to treat pain. These drug molecules bind to opioid receptors and block the transmission of pain signals within the central nervous system and gastrointestinal tract. (14) At the same time, they drive up levels of dopamine, a hormone producing an addictive feeling of euphoria. (1) Natural opiates (codeine, morphine) are directly derived from the opium poppy. Semi-synthetic opioids (heroin, hydrocodone), are chemically synthesized, but include natural opiate derivatives. Some opioids (methadone, fentanyl), are completely synthetic. (14) Fentanyl is sometimes prescribed to cancer patients and is routinely used in anesthesia. It is 100 times more potent than morphine and 30 to 50 times more powerful than heroin. (1) The pain-killing and euphoric effects of opioids are accompanied by a depression of the respiratory and digestive systems. Taking opiates in combination with other depressants or taking too high of a dose can lead to failure of the respiratory system and death. (13).

The statistics are staggering and addiction is on the rise. • 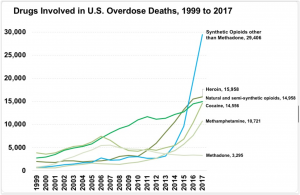 •  According to the U.S. Drug Enforcement Administration, hydrocodone and oxycodone have been the two most widely distributed controlled prescription drugs in the U.S. from 2006 to 2014. Since 2002, the number of deaths linked to prescription pain killers has exceeded the numbers due to cocaine and heroin combined. (4)

•  A CNN news report and research letter published in JAMA Pediatrics on December 12, 2016 reported that the incidence of neonatal abstinence syndrome (NAS), or opioid withdrawal in newborns, increased 5-fold in the U.S. from 2000 to 2012. (3,16)

Misuse of prescription pain killers is leading to the use of more potent pain killers, dangerous drug combinations and the use of illicit drugs – drugs that are completely unregulated and more powerful than ever.

Greater than 2% of the four million babies born in the United States (U.S.) each year are known to be exposed to opioids, but the actual number is likely higher. Exposure to opioids in utero causes addiction, leading to severe withdrawal, termed Neonatal Abstinence Syndrome. Over 80,000 newborns are affected each year, increasing newborn hospital stays eight-fold, increasing costs twenty-fold and causing unnecessary pain and suffering. Base Pair has been awarded an SBIR grant to develop aptamer-based point-of-care tests for opioids to rapidly diagnose neonatal abstinence syndrome. 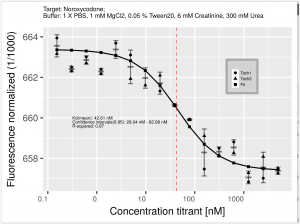 specific reagents and tests for opioids and opioid metabolites has proven difficult and time-consuming. While research abounds with antibodies to opioid receptors, antibodies to opioids themselves are few and far between.  Because opioids are small molecules, their immunogenicity is generally low and techniques for altering small molecules to induce antibody production often fail or negatively affect antibody specificity. (9,7) In recent years, researchers have been turning to aptamers.

As part of an aptamer selection project for the National Institutes of Health, Base Pair discovered aptamers with high selectivity and affinity to several opioids and opioid metabolites for detection in neonatal urine. Aptamers were discovered for oxycodone, hydrocodone, fentanyl and their respective primary metabolites noroxycodone, norhydrocodone, and norfentanyl. The binding curve for noroxycodone, generated using microscale thermophoresis, is shown at right. Selection of aptamers to additional opioids and opioid metabolites is in process.

Contact Base Pair for more information on available opioid aptamers.

Researchers at Vanderbilt University have combined Base Pair aptamers with compensated interferometry to achieve sensitive, selective detection of opioids and opioid metabolites in 50% urine. 24 sample-reference pairs were tested in less than 2 hours, using only 10 µL of each urine sample. The LOD for the opioid assays ranged from 44 – 183 pg/mL (90 – 245 pM). The LOQ ranged from 44 -183 pg/mL (141 – 611 pM), with the fentanyl assay being the most sensitive. Because opioid concentrations in urine drop over time, assays with enhanced sensitivity can extend the window of detection to many hours or even days following exposure, depending upon the opioid assay.18

interferometer consists of a laser, fused silica capillary, and CCD camera. The laser-capillary interaction produces fringe that is captured by the CCD camera. Aptamer-target binding produces a positional shift in the fringe that can be measured by analysis software and is proportional to the target concentration in the sample. Each sample-reference pair is separated by a 50 nL droplet of oil. A droplet generator and syringe pump are used to regulate sample size and flow through the capillary. The wide beam enables the sample and reference to be analyzed simultaneously. Testing requires only 10 µL of neat urine sample, divided into 5 µL each for the sample and reference. Neat urine sample is diluted 1:2 with aptamer solution or reference solution for testing. Six sample-reference pairs can be analyzed in 14 minutes. Reported results are the mean of five measurements of each sample-reference pair, using just 0.75 µL per measurement.18, 19

As part of the Fast Track Small Business Innovation Research grant from the National Institute on Drug Abuse of the National Institutes of Health, Base Pair is selecting aptamers to additional opioids and their metabolites. Base Pair is also evaluating several commercially-available analysis platforms with Base Pair aptamers for the detection of opioids and their primary metabolites in urine. Preliminary studies involving solution-based fluorescence detection and electrochemical detection are in process.

Interested in evaluating Base Pair opioid aptamers in your platform, selecting aptamers for other small molecule drugs, or investing in opioid projects at Base Pair?