Base Pair is pleased to welcome Anna Hickey to our scientific team. Anna received a BS in Biochemistry from the University of Oregon. As an undergraduate she spent three years studying cisplatin’s cellular targets in the DeRose laboratory. Her research culminated in an honors thesis in which she carried out a unique hybridization-based DNA pulldown assay using click chemistry to isolate platinated cellular DNA from complex mixtures.
“I’m excited to implement the chemical biology skills I’ve learned to develop aptamers for customer applications.”  -Anna Hickey

Base Pair is pleased to offer a new line of ready-to-use buffers for aptamer resuspension, aptamer folding, and aptamer reduction. Visit the Products Page to view product information and data sheets.

Mosquito-borne diseases continue to be a 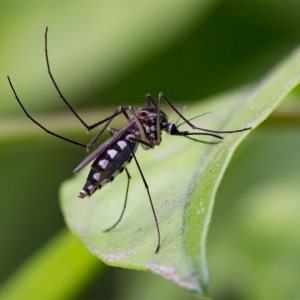 huge problem in tropical climates around the world. As mosquito-borne viruses make their way from tropical regions in Africa and Asia to Latin America through insect migration and global travel/commerce, the hurricane season brings an increase in rainfall and standing water where mosquitos often lay their eggs followed by spikes in reported cases of infection. (1)

Malaria is a parasitic infection transmitted by the Anopholes mosquito associated with fever, headache and chills. While malaria cases are on the decline, there were more than 212 million cases of malaria and 429,000 deaths reported in 2015. Though 91 different countries reported malaria cases in 2015, more than 90% of cases and deaths were reported in Africa, with 70% of deaths occurring in children under the age of five. Malaria is curable, but it can take 7 to 15 days for symptoms to appear and treatment within 24-48 hours of symptoms is critical. (7,8)

The Dengue virus is transmitted by the Aedes aegyptis mosquito. An estimated 390 million people worldwide are infected with the dengue virus each year, often experiencing high fever and muscle / joint pain. In 2015, 10,500 cases of severe dengue were reported, along with 1,181 deaths. In some parts of Asia and Latin America, severe dengue is the primary cause of serious illness and death in children. Though there is no specific treatment, a dengue vaccine is now available. Early detection and general medical care can significantly reduce fatalities. (6)

The Chikungunya virus, Zika virus, and Yellow Fever, are also carried by the Aedes aegyptis mosquito. While the Chikungunya and Zika viruses were originally associated with temporary fever, rash, and joint pain, the discovery of a link between Zika virus and Guillain-Barre syndrome and microcephaly, a congenital brain abnormality, has increased concerns. Because Zika can also be sexually transmitted, pregnant women are at particular risk in regions where Zika is present. There is currently no specific treatment or vaccine for the Chikungunya and Zika viruses. (5,9) The strong similarity between symptoms of infection for the dengue, Chikungunya, and Zika viruses and the presence of multiple viruses in certain areas frequently leads to misdiagnosis. Highly selective, rapid point-of-care tests are needed to quickly identify and treat infection. (8)

Application of Aptamers in Mosquito-Borne Disease

Accessible detection assays, treatments, and vaccines are lacking for many of the WHOs neglected mosquito-borne diseases. Because aptamers are highly selective, quickly and easily selected against specific strains of viruses and viral proteins, and very temperature-stable, they are ideal candidates for the development of new diagnostic tests and potential therapeutics for tropical diseases.

Researchers in Hong Kong completed feasibility testing of two aptamer-based colorimetric tests for the detection of malaria in whole blood lysates. Researchers explored both a syringe test using filter paper and a plate-based format using aptamer-functionalized magnetic beads. While the syringe test yielded better sensitivity and a broader dynamic range, more sample pre-treatment was required to remove interference from hemoglobin. The plate-based assay showed sufficient sensitivity and proved to be more user-friendly. Both formats showed selectivity for malaria and yielded semi-quantitative colorimetric results visible without instrumentation. Through lyophilization of detection reagents, the researchers generated an assay with extended stability at high temperatures. (4)

In 2015, researchers in Taiwan developed DNA aptamers to the dengue virus by selecting against domain III of the flavivirus envelope protein (ED3). They identified an aptamer with anti-viral activity against all four serotypes of the dengue virus. (2) In 2016, researchers in Brazil selected DNA aptamers against the 5’-UTR region of the dengue virus. The aptamers prevented translation of viral proteins involved in infection. Researchers are continuing to refine aptamer sequences to enhance aptamer utility as both diagnostic reagents and novel therapeutics. (3)

Improved efforts to reduce standing water near homes and populated areas; use of mosquito netting, protective clothing, and mosquito repellant; and support of municipal efforts to reduce mosquito populations can help reduce the number of infections, but they will not eliminate mosquito-borne disease. As part of the effort to enhance tracking and surveillance of mosquito-borne diseases, Base Pair is working with the University of South Florida and the Gates Foundation to select aptamers for detection of Zika, Chikingunya, and dengue viruses in mosquito saliva. Meanwhile, researchers continue to explore the application of aptamers to generate simple point-of-care diagnostics, new vaccines, and specific treatments. (1,8) Contact Base Pair for more information on custom aptamer selection and assay development.

Base Pair scientists are currently working on a new aptamer-based intracellular analysis method that will enable detection of intracellular events within live cells without the addition of a dye, fluorescent label, or fluorescent protein. There are many potential applications for this new method, from confirmation of transfection to monitoring of protein expression. We’d like to determine which applications will have the greatest impact. Take our brief, 10-question survey and let us know what types of intracellular analysis are of most interest to you. One lucky respondent will receive a $50 Visa gift card. Vote Today!